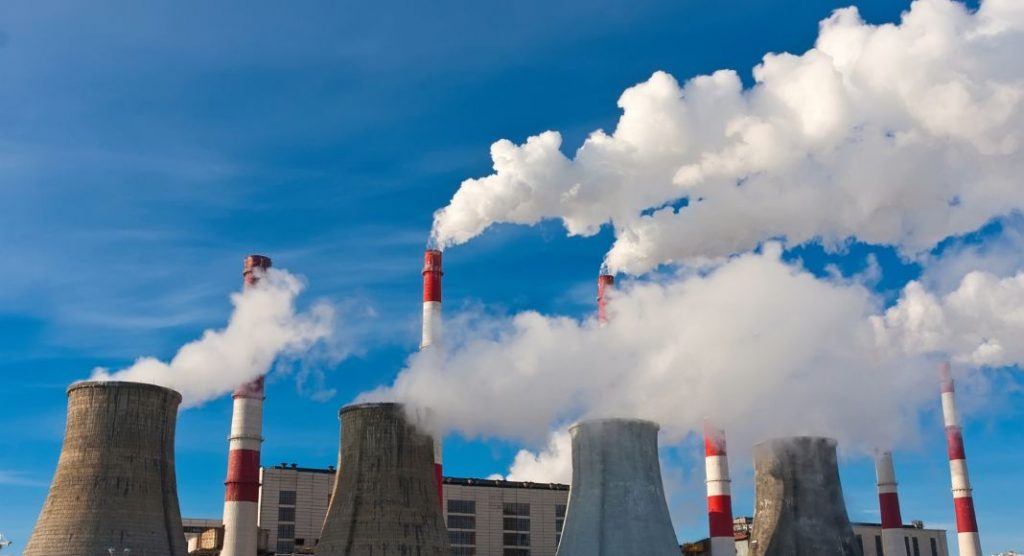 Air pollution is the presence in or introduction into the air of a substance which has harmful or poisonous effects to the health of humans and other living beings, or cause damage to the climate or to materials. More elaborately, it is the contamination of the environment by any chemical, smoke, hazardous gases or any biological cause that modifies the natural characteristics of the atmosphere. Household combustion tools, vehicles, dust, factories, deforestation, wildfire, volcanoes and many other reasons are behind air pollution.

A fossil fuel is a hydrocarbon-containing material formed naturally in the earth’s crust from the remains of dead plants and animals that is extracted and burned as a fuel. The main fossil fuels are coal, crude oil and natural gas. These fossil fuels currently supply about 80 percent of the world’s energy. When fossil fuels are burned, they release a large amount of carbon dioxide, a greenhouse gas, into the air. Carbon, nitrogen, sulfate, as well as other oxides are emitted by fossil fuels. It increases heat in our atmosphere, causing global warming.

Landfills can cause air pollution by emitting dust and gases such as methane, carbon dioxide, and so on. Landfills can produce very bad odors and gas. Ammonia, sulfides, methane, and carbon dioxide are produced of the gas. The gas can create smog if left uncontrolled.

Exhaust from factories, industries and vehicles:

Exhaust from factories and industries including chemicals, hydrocarbons, organic compounds, and carbon monoxide is released into the atmosphere reduces the quality of the air we breathe. Factories contaminate the air by exhausting gas, chemicals and smoke. The toxic gases that factories and industries release to the environment are very harmful. With the need of the time, the number of vehicles has increased abnormally globally. Vehicles exhaust carbon monoxide, hydrocarbons, nitrogen oxides, particles, volatile organic compounds and sulfur dioxide.

Sulfur and chlorine gases from volcanic activity, smoke and ash from wildfires, dust storms, and biological decay are common sources of air pollution. Wildfires release large quantities of carbon dioxide, carbon monoxide and fine particulate matter into the atmosphere. It puts a negative impact to the environment by polluting air.

Planting more and more trees can help save the earth from air pollution and climate change. Trees inhale carbon dioxide and exhale oxygen. It is the exact opposite of the human being. You can breathe well if you plant more trees. Trees help us from excessive heat and other natural calamities. The most fruitful solution to air pollution is saving and planting more trees.

Walk, use bicycle and public transports:

We can live in a less pollutant world by minimizing the use of vehicles. Walking is good for health and it puts zero contribution to the air pollution. You can try riding bicycle rather using motor vehicles. Using public transports can be a remedy of air pollution as many people can get in a bus where a private car can only transport three to four persons.

People can keep the world more livable by saving energy. The excessive use of energy will put a negative impact to the environment. It means the demand of the fossil fuel will be minimized if people save energy. So, the less amount of carbon dioxide will be emitted in the air. Purchase energy efficient products and equipment to save energy and keep the pollution level lower.

You might be upset after hearing that smoking leads to the most common cause of indoor air pollution. Smoking a cigar not only puts your life in danger but it also affects others around you. Cigarette smoke contains many substances and toxins that remain in the indoor air for a long time. Some of the health hazardous compounds found in smoke include lead, arsenic, ammonia, carbon monoxide and nitrogen dioxide. So, quit smoking as soon as possible.

We need to be very careful about air pollution for a better tomorrow. Social awareness is also very important to minimize the level of air pollution. Let us breathe a fresh air in this beautiful world.

Know also about how to recycle plastic bottles easily? Reduce Plastic Use to Save The World SQM Club: Everything You Need to Know, Facts and Benefits