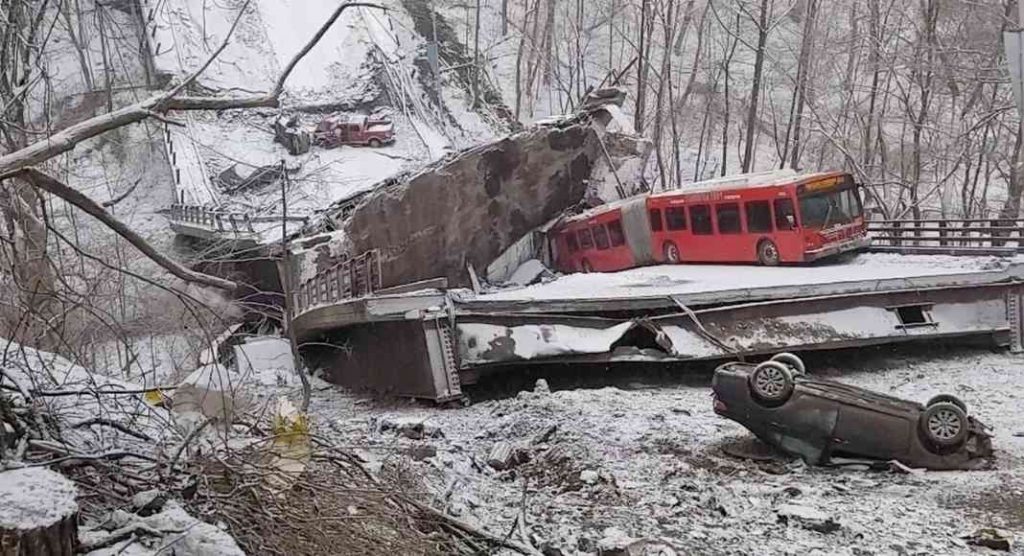 Several people were rescued from a dangling bus when a four-lane bridge collapsed in Pittsburgh, causing rescuers to descend nearly 150 feet while others created a human chain.

A snow-covered bridge in Pittsburgh fell Friday morning, injuring ten people. President Joe Biden was scheduled to appear in Pittsburgh only hours before the collapse to promote his $1.2 trillion infrastructure plan and efforts to enhance America’s supply chains.

Luciani told, “I could just remember it.” “The bus was bouncing and rocking for what seemed like an eternity, but it was probably less than a minute before it ultimately came to rest, and all I could think about was how thankful I was that no one on board was injured.”

The passengers appeared to be fine, He stated, so he allowed the air brake and waited for assistance. After climbing with spotlights in the dark of night darkness, first personnel found them then used a sling to aid him and the other passengers climb to escape, Luciani said.

President Biden is appreciative to the first responders who hurried to help the cars that were on the bridge at the time, according to White House Press Secretary Jen Psaki. The President will go on with his trip planned for today, and he will keep in touch with officials on the ground to see what additional help we can offer.

According to him, the cause of the collapse is being investigated. A team from the National Transportation Safety Board is on the scene, and an accident Reconstructionist will use a drone to map the area. Authorities will remove vehicles and debris from the scene after the mapping is completed.