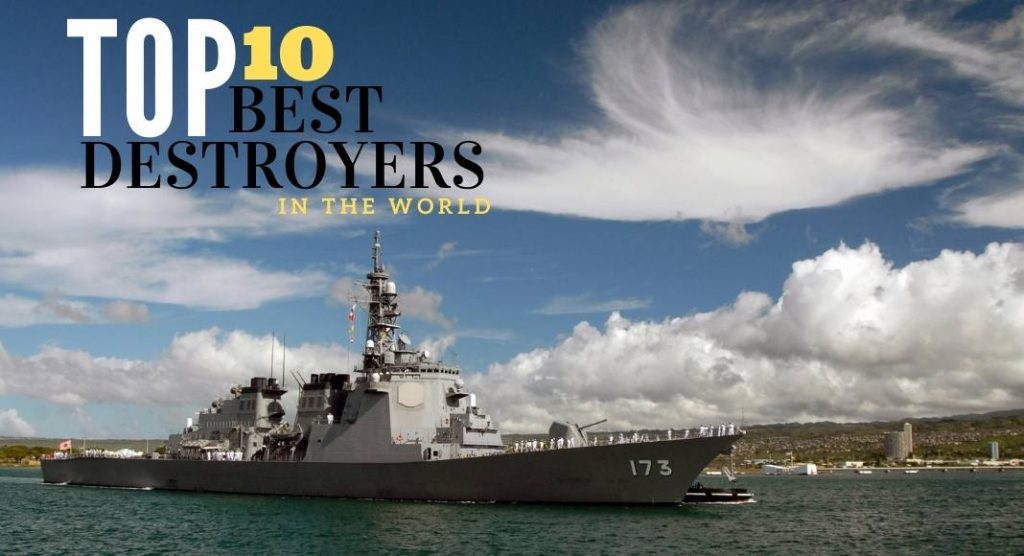 Modern technology has brought a radical change in the naval military across the world over the years. Currently, many navies are now using huge warships called destroyers to destroy vessels, missile boats and other kinds of war vehicles. The destroyers are now being used for providing escort roles to protect aircraft carriers against possible threats.

Nowadays, destroyers are well-equipped with advanced technology like radars and sensors to detect the position of the enemies at a long range of distance.

In this context, a question that arose in the mind of many military enthusiasts is what are the top 10 destroyers in the world in 2022 at present?

You should keep in mind that destroyers are very expensive and thus most of the navies in the world can afford the warship. Only powerful militaries of some influential countries have destroyers in their fleet.

Some destroyers are so powerful that they can carry at least 90 missiles. In this article, we are going to discuss the 10 best destroyers in the world in 2022 based on the various kinds of parameters. Follow a list of

The country of origin of the Arleigh Burke Class (Flight III) is the United States of America and its manufacturer is Ingalls Shipbuilding, Bath Iron Works.

The ship is named after AdmiralArleigh Burke, an American destroyer, who played a vital role during the Second World War, which took place between 1939 and 1945.

This is a multi-functional warship of the USA and the best one in the world presently. The cause behind this is that the destroyer is equally effective in carrying out surface to surface, surface, to air, and surface to land missions.

The Arleigh Burke class ship is used by the American Navy in a number of missions. Furthermore, the USA is spontaneously strengthening the ability of the destroyer with even ultramodern radars, sensors, and missiles making them even more deadly.

The country of the origin of Sejong, the great class destroyer, is South Korea and its manufacturer is Hyundai Heavy Industries, Daewoo Shipbuilding, and Marine Engineering.

It is an anti-air missile– RAM Block 1 CIWS and anti-ship missile– SSM-700K Haeseong.

The ship has been named after Sejong the Great who was the fourth king of the Joseon Dynasty of Korea. This kind of warship is also known as KDX-III.

The size of the destroyer is enormous and it can carry two SH-60 Seahawk helicopters or Super Lynx.

This destroyer is designed deliberately to carry the combat system of Aegis. Presently, the Korean Navy operates three destroyers of this class ROKS Yulgok Yi I, i.e. ROKS Sejong the Great, and ROKS SeoaeRyuSeong-ryong.

It is an anti-air missile – 32 Barack 8 Missiles and anti- hip missiles – 16 BrahMos Missiles.

This destroyer has some x-factor that makes it special from other of its kinds. It is able to Brahmos missile system which is at present the fastest cruise missile in the world.

BrahMos is used for both land-attack and anti-ship missions. Moreover, Kolkata Class Destroyer is well equipped with a Barak eight missile system which is one of the most highly developed Air Defence systems in the world.

It is the updated version of the previous Delhi Class destroyer with over 2000 changes. It is also capable to carry two Sea King Helicopters or HAL Dhruv.

Type 052D Class Destroyer’s origin country is China and it has been manufactured by Jiangnan Shipyard, Dalian Shipbuilding Industry Company.

Type 052D is the best destroyer of China’s Navy Surface Force which is equipped with radar, an active electronically scanned array (AESA), and state-of-the-art weapons.

This type of destroyer is used for all kinds of missions and thus, people call the ship China’s first dedicated multi-functional destroyer. You can also read more about World’s Much-Discussed Top 10 Fighter Aircrafts.

The presence of such a lethal destroyer in number makes the Chinese People’s Liberation Army Navy Surface Force alarming to the naval fleet in the world.

It is also one of the finest and biggest destroyers in the world at present. It has 300 crew members carrying capacity. The Atago Class Destroyer is mainly a much-advanced version of the Kongo class.

It has better sensors, radar, and war weapons. The X-factor of Atago Class Destroyer is its capacity to use Aegis Weapon System (AWS).

At present, there are two ships of this class Ashigara serving and i.e. Atago under the possession of the Japan Maritime Self Defence Force.

Aikizuki Class Destroyer’s origin country is also Japan and it has also been manufactured by Mitsubishi Heavy Industries.

It is one of the smallest destroyers on the list of the best warship in the world in 2022.

The origin-country of the Kongo Class Destroyer is Japan and it Mitsubishi Heavy Industries and IHI Corporation are its manufacturers.

This destroyer has been named after mountains in Japan, and all four ships under this class have also shared their names with the Second World War era Japanese warships.

It can be said this class of ships is a lot enthused by the Arleigh Burke class warship of the USA Navy. It has Aegis Weapon System (AWS) which is frequently classified as the best weapon system across the world.  In addition, it can carry K helicopter/SH-60J.

Its origin country is the United Kingdom. It has been manufactured by BAE Systems Maritime – Naval Ships.

Type 45 destroyers are usually known as daring class one. The ship was designed for the Royal Navy was looking for an alternative to replace type 42 destroyers.

Type 42 destroyers were very supportive of the UK’s Royal Navy during the Falklands War. The warship which is powered by two GE Power Conversion Advanced Induction Motors and VDM25000 Drives, 20 MW (27,000 shp) can clock the speed up to 32kn (59 km/hr).

As of 2021, the four destroyers of this class are serving in the UK Royal Navy and two destroyers are under renovation.

The origin-country of Type 052C Class Destroyer is China. It has been manufactured by Jiangnan Shipyard.

Type 052C destroyer is the updated version of type 052B one. This class of warship has a very attractive story. In 2002, The first two ships of this class were laid down at Jiangnan Shipyard in Shanghai. And those entered the navy service in 2004 and 2005 respectively. Since then, no new ship was laid down till 2010 due to the rearrangement of the shipyard.

The key feature of why it is on the list is its stealth. It is tough to detect the ship on the radar. Moreover, the armament used by O52C destroyers is also very remarkable.

The birthplace of the Horizon Class Destroyer is France and Italy. It has been manufactured by Horizon Sas (DCN, Thales, Fincantieri, Finmeccanica–Leonardo-Finmeccanica since 2016), Leonardo since 2017

It is equipped with Anti-Air Missiles – PAAMS air-defence system.

It is the outcome of France and Italy’s joint venture. The contract for production of the destroyer was signed between the two countries in September 2000.

Earlier, the United Kingdom was also a partner in the project but later it withdrew to pursue its own national design.

The major highlight of the destroyers is that they can deploy the principal Anti Air Missile System (PAAMS). Italy has replaced its obsolete Audace class destroyers with Horizon class. Simultaneously, France has replaced its fleet of Suffren class carrier escorts. How to Use A Virtual SMS Number to Bypass Phone Verification