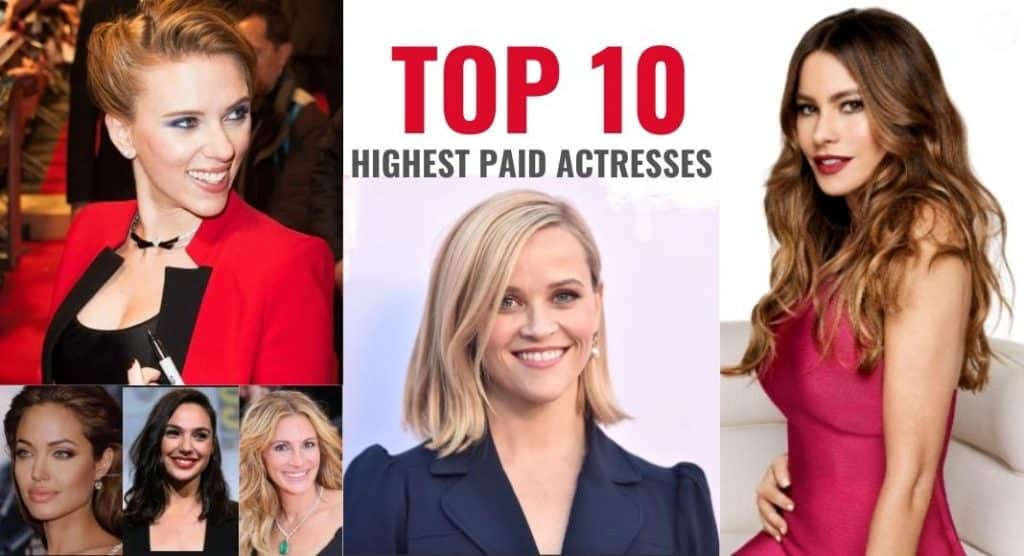 World’s Top 10 Highest Paid Actresses: The pandemic of the novel coronavirus has severely affected the media and film industry across the world including Hollywood but fortunately, many actresses earned a handsome amount of money during the nagging standoff situation.

The coronavirus first detected in Wuhan province in China in 2019 and started spreading rapidly across the world.

Following the evolving situation, authorities have kept theater halls shut down to contain the spread of the virus, keeping the online medium active for releasing new movies and drama serials globally.

We will be got stunned if it is known which actress earned how remuneration during the pandemic period from 2021 to 2022.  Just go through the write-up and then you will come to know the list of the highest-paid actresses in the world at present.

Scarlett Johansson is in the top position in the list of the 10 highest-paid actresses in the world in 2021-22 with an estimated amount of earning worth $56 million.

The 36-year old actress has been topping the list of the highest-paid actresses since 2018. The reason for her success is nothing but her love and devotion to acting and releasing her blockbuster and super hit movies.

She will be witnessed in her upcoming movie Black Widow. She is also engaged in charitable activities for various associations that provide help people who are infected with AIDS.

Scarlett appeared in people’s attention for her extraordinary performance in The Horse Whisperer in 1998. Scarlett Johansson, an American actress has critically been praised for her role as Natasha Romanov, a fictional character in the hit Marvel’s Avengers film franchise. You can also read more about the Top 10 Hottest Female Celebrities in the USA.

Shopping and listening to music are her hobbies and she also loves to watch medical documentaries. She wished that if she had not been an actress then she would have become a dermatologist.

Sofia Vergara is one of the most talented and expensive actresses, producers, and presenters in America. She has secured second place in the highest-paid actress list in 2021-22. She is also a judge of Got Talent in America and a successful producer in Hollywood, comedian, model, and presenter.

Apart from acting, she makes money by doing business, shooting, and endorsements.

She was the highest-earning performer in America in 2012, 2013, 2016, and she was the second highest-paid television artist in the world in 2019. Sofía Vergara is her real name and she is also known as Palillo, La Toti and etc.

Reese Witherspoon owned the Golden Globe Award worth of a whopping amount of $35 million. She encouraged a lot of women and people across the world. She is also a victorious businesswoman. She is one of the most appreciated and prominent actresses of the 90’s era.

She has played powerful female characters on the big and small screens for years. She has an attractive and impressive career so far.

Reese, a 45-year-old actress has engaged in other projects in a view to keep her busy. She sold her company– Hello Sunshine– for a huge amount of money and owns a clothing line.

In 1999, Reese played a breakout role in a movie named Cruel Intentions.

Her performance got a wander review and she was well on her way to make it big though she just earned $250,000 for the role, per Parade.

Angelina Jolie is one of the top actresses in Hollywood because of her great performance and acting in several incredible movies. Her own several awards prove that she is a talented and passionate actress. At the same time, she is an action star and also well known for her action movies.

Angelina Jolie is the most well-known and popular actress in the world. She has made the highest amount of wealth during her acting career. She earned US$20 million for her role in the 2010 film Salt. Forbes reported that Jolie bagged the majority of her US$35.5 million in 2020 from her starring role as Thena in Marvel’s Eternals.

People across the world will see the most popular actress through her upcoming film project Thena in Marvel’s Eternals. Jolie earned the bulk of her money from traditional films, including the big check for Marvel.

She is also an activist for human and women’s rights. She had to face many hindrances and problems at the beginning of her film career. She had hatched an effort to take her life by herself several times. Also, she had decided to hire a hit-man to kill her. Besides, she suffered insomnia, depression and she had a nervous breakdown.

Gal Gadot has been crowned as Miss Israel when she stepped into 18. She is an Israeli actress. She is one of the multitalented and popular actresses across the world. She acted in the movie Wonder Woman 2017 and earned audiences’ love and appreciation. She earned $31.5 million in 2020 by doing so.

The Iraeli actress proves herself as a foremost actress in the international level, with her earnings. Gadot earned $31.5 million in 2021. She has been paid $20 million for acting in the Netflix film Red Notice, of which production has resumed recently after the first wave of Covid-19.

Julia Roberts’ Smile has been insured for $30 million. No one can deny that Juli is the sweetheart of the American people. She is an extraordinary actress for her laugh and cry. She looks equally at home when she talks on the red carpet.

She loved animals and dreamed to become a veterinarian one day. Both her sister and brother were encouraging her for acting in the film then Roberts decided to try to do her family business.

Her acting in the 80s films made her a popular and famous actor ever. Such appeared in the film industry with a huge talent, plucky wit, incredible charm, and an infectious laugh. And, the girl emerged as the next-door beauty and purely unstoppable due to her commitment and dedication to the acting.

She appeared as everyone’s favorite call-girl in pretty woman in 1991. The charming and loving comedy paved Roberts’ path to a leading lady in Hollywood.

Roberts is the recipient of many accolades including three Golden Globe Awards as she is one of the most successful actresses in America.

In 2015 and 2016, Jennifer Lawrence, an American actress, was one of the highest-paid performers. She was part of Hunger Games and a number of super and trendy movies and series. In 2020, she earned $28 million.

She is an award-winning actress. Her net worth is $160 million. She won the Academy Award for Best Actress for her acting in 2012’s Silver Linings Playbook.

She was the highest-paid actress worldwide in 2015 and 2016. Lawrence was on Time’s list of the 100 most powerful persons in the world in 2013. Read more also Kylie Jenner Garners 300 Million Instagram Followers.

Jennifer Aniston is 52 years old actress who acted in Friends which is the most popular series in the world and she is loved by everyone almost. She makes money from acting gigs, endorsements, and other sources of income.

Her net worth is $240 million approximately Rs. 1800 crore. She earned recognition worldwide for representing the character Rachel Green in the television sitcom Friends.

Once, she has started in various movies which have hit the box office. She works in The Morning Show and the Apple TV+ show.

She takes $8 million to $10 million per movie. She has been paid $22,500 per episode for the first season of Friends which gradually increased to $1 million for each episode of season nine and season ten.

Melissa McCarthy is one of the most lovely and talented comedian actresses and producers in the world.

She has so far received two Golden Globe Awards. Though she is the most beloved actress, people almost did never elegant with her charm humor.

She depended on her father’s financial assistance while she was going to numerous auditions, first in Los Angeles and New York City.

In 2017, McCarthy’s plan was, if she has not been made as an actress by her 30th birthday, she would leave the path and do something else. You can also read more about Jim Carrey’s Personal Life.

A week before, she was turning stepping up into the 30, she was given a call for Gilmore Girls and the role of Sookie St. James, which gift her stability in the long-running series.

The Big Bang Theory’ made and the self-made actress Kaley Cuoco takes $1 million per scene. She accumulated around $25 million from endorsements and her acting gigs in 2020.

Cuoco, 32 years old actress income sources are The Big Bang Theory and her roles in films and TV shows such as 8 Simple Rules and Charmed. Her net worth from these sources is estimated worth around $55 million, per GoBankingRates. Cuoco, recently, agreed to give her voice for Harley Quinn, a new adult cartoon series. Succubus Spell: All You Need To Know About