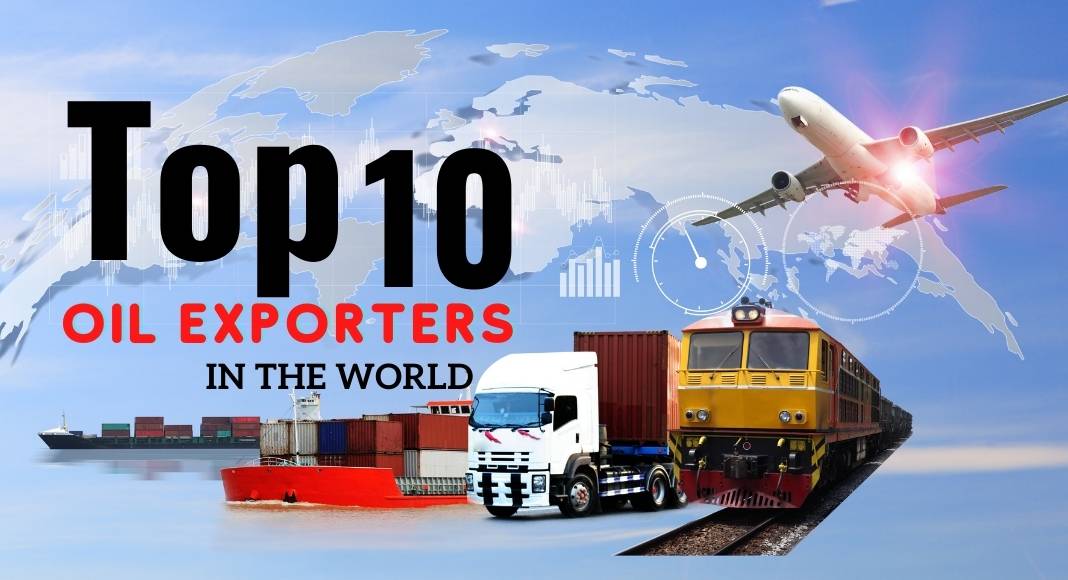 Oil is the most important exported product all over the world. Crude petroleum accounted for 5.44 percent of global trade in 2019.

Traditionally, the Kingdom of Saudi Arabia led the world in oil exports annually but its monopoly dominance was ruined in 2019.

Now the United Arab Emirates is now in the driving seat as the world’s largest oil exporter. America has also enlarged its share of oil exports in the world market, accounting for 5.71 percent of exports in 2019, up importantly from 0.75 percent in 2014.

We will try to give a brief idea in the article about the 10 top oil-exporting countries across the world, according to the recent data reported by the Statistical Division of the United Nations. You can also read more about the 10-best-destroyers in the world.

It is a small country and its approximate size is like South Carolina. The United Arab Emirates exported oil worth $176 billion in 2019, accounting for 16.13 percent of oil exports globally.

As the largest oil-exporting country, the UAE is only the seventh-largest oil producer. The country produced 3.78 million barrels of oil per day, accounting for 4 percent of the global output in 2020.

The UAE is considered as the seventh-largest oil reserves in the world. It possesses around 100 billion barrels of oil. Despite this, the country’s national economy is less dependent on oil than before, though gas and oil output still account for around 30 percent of its GDP.

Saudi Arabia, the largest Middle Eastern country in the size of the area, at once was called the oil powerhouse of the world. It was the top oil exporter until the position was taken by the UAE. Despite this, the Kingdom of Saudi Arabia accounted for 11.54 percent of oil exports in the globe in 2019.

The Kingdom of Saudi Arabia remains the top oil producer in the Organization of the Petroleum Exporting Countries (OPEC), by producing 10.81 million barrels of oil per day or around 12 percent of the global output in 2020.

The Kingdom of Saudi Arabia keeps around 15 percent of the world’s oil reserves under its possession. And thus, the industry accounts for as many as 70 percent of the country’s total exports and more than half of the government revenue.

Russia scores the third position in the chart of the 10 top oil exporters. In 2019, Russia did 10.53 percent of global exports worth around $115 billion.

In 2020, Russia’s oil production amounted to 10.5 million barrels per day. It was produced after the major names like Surgutneftegas, Rosneft, and Gazprom. It accounts for 11 percent of oil production globally.

The United States and European Union (EU) imposed economic sanctions on Russia as it connected Crimea from Ukraine in 2014.

As consequence, Russia’s energy companies are prohibited from the right of entry capital markets in the regions. As revenge, Russia again carried out the attack on Ukraine on February 24, 2022, forcing the US to impose tougher sanctions including a ban on the import of Russian oil.

Kuwait, officially known as the State of Kuwait, is a country in Western Asia. It is a small country in size. It is located in the Arabian Peninsula. Despite its small size, it is on the list of the world’s top 10 oil exporters.

Kuwait exported 7.55 percent of oil in the global market in 2019, which was more than worth $82 billion in that year.

In 2020, Kuwait produced around 2.75 million barrels of oil per day, emerging as the world’s 10th largest oil producer. The country’s reserve is the 6th largest in the world.

Iraq, officially known as the Republic of Iraq and is a country in Western Asia. Iraq was the world’s 2nd largest oil exporter in 2016. But it sits in 5th place in 2019 by exporting around 6.34 percent of all oil in that year. Furthermore, it is the 2nd largest oil producer in OPEC after the Kingdom of Saudi Arabia.

Iraq was the 5th largest oil reserves in the world. But according to the US Energy Information Agency, the majority percent of its reserve is already tapped or under development.

Iraq also is in the face of the challenge as it is being extremely dependent on oil, which accounted for an estimation of 91 percent of the government revenue in 2018.

It is a country in North America. Its three territories and 10 provinces extend from the Atlantic to the Pacific and northward into the Arctic Ocean. It is situated on 9.98 million square kilometers of area, turning it into it the world’s 2nd largest country in terms of total area.

It is the 6th largest oil-exporting country across the world. It exported around $68 billion worth of oil in 2019 containing 6.25 percent of the total in the globe.

It keeps around 167 billion barrels of oil under its possession and it is the 3rd largest country in terms of keeping a reserve of oil in the world. The bulk of the reserve is located in Alberta’s oil sands. Canada’s oil industry is directly connected to the American national economy. Around 96 percent of oil went to America from Canadian in 2018. And, Canadian oil accounted for 48 percent of all US oil imports. Read more Top 10 fighter-aircrafts.

The US has a total of 50 states. It covers a vast area of North America, with Alaska in Hawaii and the northwest extending the nation’s presence up to the Pacific Ocean.

America is the 7th largest oil exporter in the globe. It exported around $62 billion of oil in 2019, amounting to 5.71 percent of the global export.

The world’s most developed and influential country significantly increased its oil output between 2011 and 2020.

The United States produced around 18.61 million barrels of oil per day, around 20 percent of the global total in 2020.

The US is known as home to some of the world’s largest oil companies, including ConocoPhillips (COP), Chevron (CVX), and Exxon Mobil (XOM).

It is an African country on the Gulf of Guinea. It has many wildlife reserves and natural landmarks. It is the most populous country. It was the world’s 8th largest oil exporter in 2019.

Nigeria exported $38.7 billion of oil, around 3.5 percent of the total global share. It has the world’s 2nd largest oil reserve on the continent.

Most of its 37 billion barrels of oil reserve are located offshore in the Bight of Benin and the Gulf of Guinea.

Nigeria comparatively faces a gathering of many clients who import its oil to meet their demand.

The government of Nigerian revenue streams, on the other hand, is much less diverse. Only 3.4 percent of non-oil revenue comes to its GDP.

Mexico is a country of North America located in its southern portion.

In 2019, it was the 9th largest oil exporter in the world. Its total exports share in the world worth around $37.1 billion, accounted for 3.4 percent.

Compared to that of the other countries on the top 10 list, Mexico’s known oil reserve is comparatively modest, totaling 5.7 billion barrels. It secures the 4rth position of oil-producing oil in the Americas after the US, Brazil, and Canada.

Like Canada, Mexico’s oil industry is closely connected to its neighbor America. Mexico exported 51 percent of its total oil to the USA in 2019 which represents about 9 percent of the US oil import.

It is a Scandinavian country surrounded by glaciers, mountains, and deep coastal fjords. It exported $27.3 billion of oil in 2019, amounting to 2.5 percent of the total global trade. It makes it the world’s 9th largest oil exporter.

It possesses the biggest oil reserve in Western Europe. It sends the majority percent of its oil to its European neighboring countries to meet their local demand.

Despite its slowed production over the course of the 21st century, its oil industry still accounts for 50 percent of Norwegian exports and ads over 20 percent to its GDP.

The Paths of The Healthy Couple: A Practical Approach